On December 20, BTC/USD declined to $45,600 low as Bitcoin targets $55k. Buyers have continued to push Bitcoin to the upside. The king coin rallied to $51,413 but was resisted. The current uptrend is intact after a minor retracement.

Bitcoin (BTC) is still in a downward correction as buyers pushed BTC price to retest the $50,000 resistance. For the past two weeks, BTC’s price has been trading in a narrow range between $45,500 and $49,200. On December 23, the bulls broke the narrow range as price reached the high of $51,413. The current uptrend is facing rejection as it reaches the overbought region of the market.

The market has declined to the low above $49,400 and it has commenced a fresh uptrend. On the upside, if buyers breach the $51,000 resistance and the bullish momentum is sustained, the market will rally to $55,000. The bullish momentum will extend to a $58,000 high. Conversely, if the bulls fail to overcome the $51,000 resistance, the downward correction will resume. Bitcoin will fall again and be compelled to a range-bound move between $45,500 and $50,000.

Addl. Commissioner Shikha Goel has warned Indian citizens to invest in crypto only through reputed and long-established crypto exchanges. The Police commissioner has warned the public about the rise in cybercrime. An event hosted by the city police of Hyderabad, India has indicated that the public should not transfer cryptocurrencies to unauthorized private wallets. According to Shikha Goel: “They [fraudsters] will ask you to share your cryptocurrency details. And once you put it in your wallet, then the money is taken away.” The fraudsters convince the victims to transfer their newly purchased cryptocurrencies for higher profits, which according to Goel: “People have been cheated of 3.45 crore rupees (roughly $458,000) in their greed for higher returns against cryptocurrency investment.” 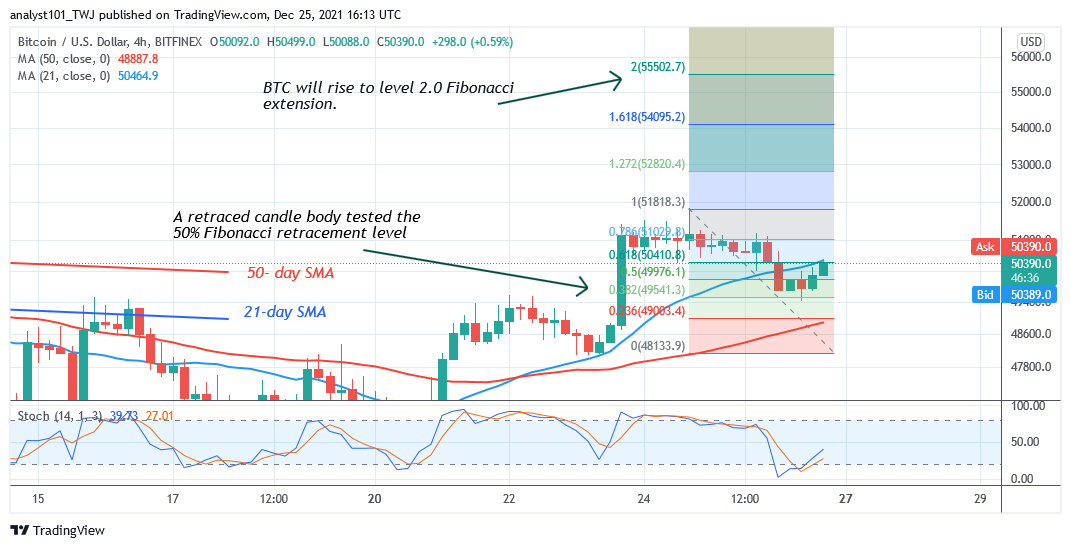 After the retracement, BTC’s price has begun to resume upward retesting the $50,000 price level as Bitcoin targets $55k . Buyers are attempting to break above the recent. Meanwhile, on December 23 uptrend, a retraced candle body tested the 50% Fibonacci retracement level. The retracement indicates that BTC will rise to level 2.0 Fibonacci extension or $55,502. 70.

Should you buy Ethereum Classic as its recovery accelerates?

Astar Network partners with Acala to boost DeFi on Polkadot

Three-quarters of institutions to use crypto in the…

Here are Bitcoin price levels to watch as BTC dips…

Number of People Working in Blockchain Industry Went up by…