The cryptocurrency market continued its slide downwards yesterday. At about $2.65 trillion, its total cap has fallen by 3.1% in the past 24 hours. It has also fallen by a little over 11.6% in the past week. Pretty much every major coin has tumbled along with the market, with bitcoin (BTC) and ethereum (ETH) dropping by around 12% in seven days. However, falls generally set the market up for rebounds, as it has shown time and again. As such, we’ve compiled a list of coins likely to rally in the coming days and weeks. These 5 cryptocurrency could see a price boom this weekend, particularly if the market recovers in a big way.

These 5 Cryptocurrency Could See Price Boom This Weekend

BTC’s technical indicators suggest it could be at the beginning of a recovery. Its relative strength index (in purple above) has just shot above 50, having been in ‘oversold’ territory over the past couple of days. At the same time, its 30-day moving average (in red) is just about beginning to rise. It’s very possible that it has reached the bottom of its selloff, and that its fortunes will turn soon enough.

It’s arguable that bitcoin has more reason to see a price boom this weekend than any other cryptocurrency. Not only does it tend to lead rallies and selloffs, but it continues to attract the most interest from mainstream institutional investors and the wider world.

For example, numerous US-based banks have launched bitcoin custody and/or investment services in the past few months. This includes US Bank, Bank of New York Mellon, State Street and Northern Trust. Likewise, institutional investment managers accounted for around $1.5 billion in inflows in one week of October alone.

This all suggests that, despite the noticeable dip, BTC is poised to rally again soon. It can be bought at nearly every exchange currently in operation. 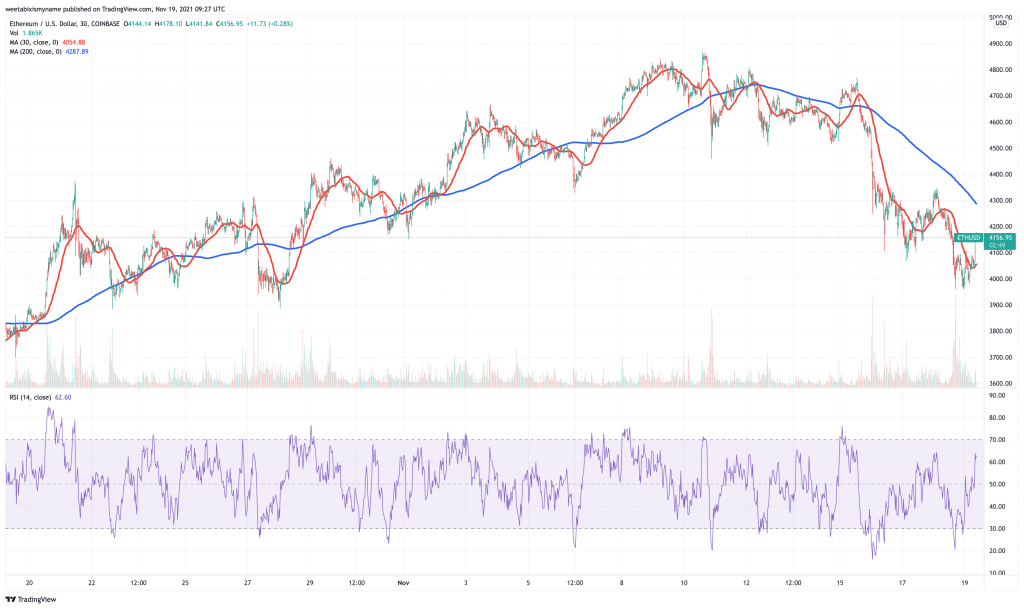 As with BTC, ETH’s RSI has begun rising since it entered oversold territory a few days ago. This suggests renewed momentum, as does the fact that its 30-day average has begun curving upwards.

And while it may have had a considerable haircut in the past week, there’s every reason to think ETH will be one of the biggest recoverers.

Firstly, it now accounts for around $180 billion in total value locked in. This is about two thirds of the entire DeFi market. Given its size, and given the fact that most new projects build on Ethereum, we can only envisage ETH continuing to rise in value in the long run.

At the same time, the London hard fork (completed in August) now means that Ethereum burns a portion of its fees. As a result, its issuance has recently become negative. And with supply declining over time, increases in demand will have an outsized positive effect on its price.

$ETH price breaking new highs while a record amount of 16.9k ETH was burnt in the past 24 hours

This also brings ETH’s issuance to a record low of -1.1% pic.twitter.com/UrG0g0urlO

If this weren’t enough, more ETH holders are also sending the coin to Ethereum 2.0’s staking contract. This now holds over eight million ETH, a figure that’s only going to increase over time, particularly as the transition to proof-of-stake draws closer (expected some time in early 2022).

This growth shows why we think ETH is one of 5 cryptocurrency that could see a price boom this weekend. It can also be bought nearly everywhere. 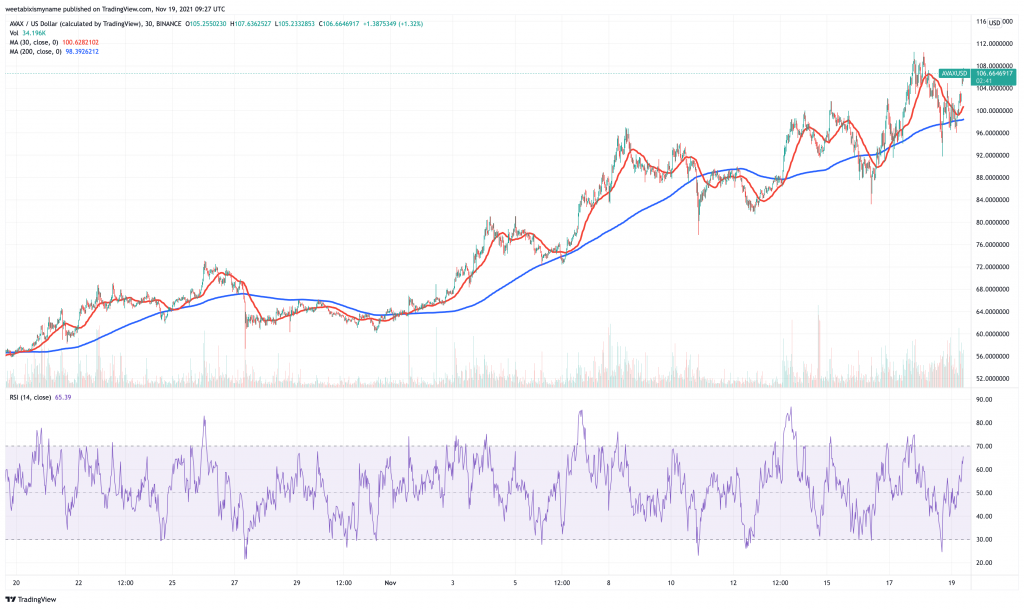 AVAX’s indicators are showing breakout momentum. Its RSI is rising above 65, while its 30-day average is beginning a new ascent above its 200-day. It’s not clear for how much longer this could continue, but when the rest of the market is sinking, traders may increasingly gravitate towards a hot coin such as AVAX.

And yes, AVAX is pretty hot right now, having signalled its long-term prospects a few months ago already. Back in September, it announced an investment round worth $230m and led by Polychain Capital and Three Arrows Capital. This is a big vote of confidence in the blockchain platform, as well as a significant injection of capital that will help it grow further.

Indeed, Avalanche has been growing steadily ever since. Its total value locked in now stands at nearly $11 billion, up from a mere $1 billion in the middle of August.

This is only just the start, however. At the beginning of this month, the platform launched a $200 million fund dedicated to boosting development of the Avalanche ecosystem. So expect not only a price boom this weekend for Avalanche, but some serious long-term growth.

The Avalanche Foundation has launched Blizzard, a $200M+ fund dedicated to accelerating development, growth, and innovation across the #Avalanche ecosystem.

Check out the full details below ⬇️https://t.co/AR25D8E2lL

Avalanche can be bought at Binance, OKEx, Huobi and KuCoin. 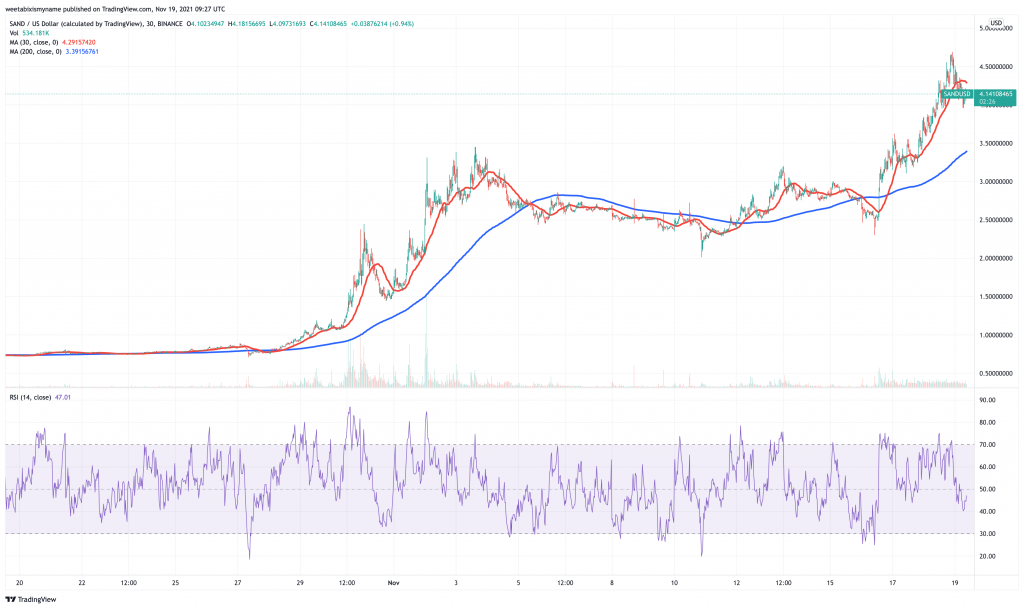 SAND has been overbought in the past few days, although its RSI has returned to more moderate territory in the past 24 hours. That said, with the coin hitting an ATH of $4.64 some 12 hours, expect its momentum to continue rising up over the weekend.

SAND is now the most-hyped ‘metaverse’ cryptocurrency in the market. It’s the native token of the Sandbox, an open-world, blockchain-based game where users can trade and collect NFTs. While casual observers may find little to distinguish it from, say, Decentraland (MANA), there are a couple of things which arguably makes it a better buy.

For one, the Sandbox recently closed a $93 million funding round led by Japanese investment giant SoftBank, suggesting that it may grow more rapidly than its rivals. Secondly, it has actually published growth data in recent months, showing that it has processed $144 million in transactions (up to the end of October) and has registered more than 500,000 wallets. By contrast, Decentraland hasn’t released recent usage data, so we can’t be sure it lives up to the hype.

SAND can be bought at Kraken, Binance, OKEx, Huobi and FTX. 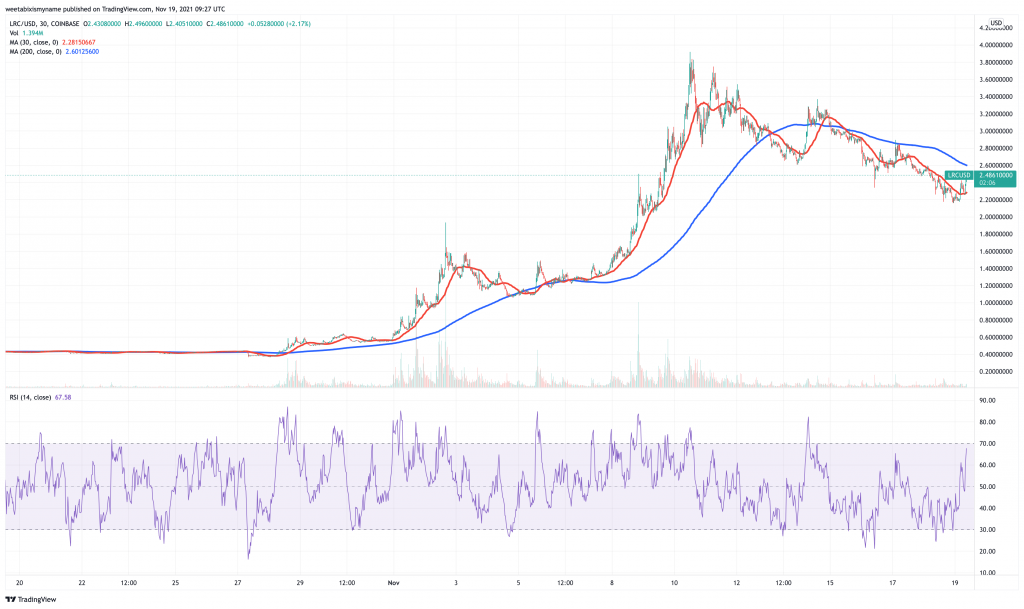 LRC’s technicals show some serious ratcheting up of momentum. Its RSI is climbing towards 70, while its 30-day average has begun a new ascent past its 200-day. Basically, there’s a good chance it could recover the ground it has lost in the past week.

LRC is the native token of Loopring, a layer-two scaling solution for Ethereum. This platform uses zero-knowledge rollups to help decrease transaction fees and increase transaction capacity, and is used with a variety of decentralised exchanges. It has gained traction in recent days more or less in proportion to Ethereum fees rising.

Ethereum fees are likely to remain high until its transition to proof-of-stake next year. This is why LRC is one of 5 cryptocurrency that could see a price boom this weekend.

Loopring can be bought at Kraken, Coinbase, Binance, Gate.io and OKEx.

Should You Start Mining Cryptocurrency In 2020? + How Much $$ Can You Make?

Should you buy Ethereum Classic as its recovery accelerates?

Astar Network partners with Acala to boost DeFi on Polkadot

Bitcoin Mining Operations Continue to Expand Amid the Crypto…

Should you buy LTC as it consolidates at key resistance?

Soccer Giants Barcelona and Real Madrid Team Up on a…